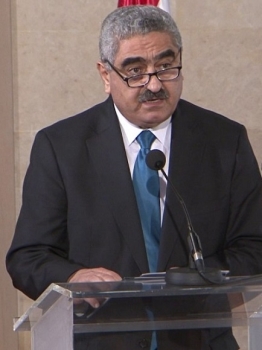 NNA- The Ministry of Public Health, the Order of physicians in Beirut, the Lebanese Society for Gastroenterology and the Lebanese society of Medical Oncology launched the National Plan on awareness and early detection of colon cancer in collaboration with the World Health Organization and Said Association for patients’ support during a conference held at the house of Physicians in Adlieh, under the patronage of Deputy Prime Minister and Health Minister Ghassan Hasbani represented by Director General Dr. Walid Ammar.

The attendees stressed the importance of preventing this type of cancer that is considered one of the most common cancer in Lebanon, and undergoing the necessary examinations as of the age of 40, the most important of which being FIT TEST that shows whether there is blood in stool that cannot be seen by the naked eye, which may be a symptom of colon cancer. In this case, the treatment can start immediately to prevent the spread of cancer cells.

On behalf of Minister Hasbani, Ammar stated that colon cancer is a preventable major cause of deaths. Collaboration is needed between all the concerned parties to control it and save the lives of many people.

“The National Plan on awareness and early detection of colon cancer covers many areas, starting with the pilot study to study the response of the citizens to the early detection campaign through the FIT test and the way the medical staff deals with it. This step aims at determining the obstacles that may to be faced in order  to prevent them during the campaign that will launched later after completing the necessary preparations to ensure its success,” said Ammar.

“This phase will be accomplished for free at Rafic Hariri University Hospital. We call on all the hospitals that are able to provide this service free of charge to accede to this project,” added Ammar.

“The national plan is not only limited to the early detection, but includes also awareness campaigns on the prevention and diagnosis of colon cancer, as well as the elaboration of scientific guidelines to the diagnosis and follow-up stages, and training campaigns for the concerned medical staff.”

“The Ministry of Public Health will pay special attention to the quality of the analyses and the skills of the physicians that will conduct colonoscopy and will adopt physicians who hold training certificates to develop their skills according to specific programs in this regard.”
Sitemap