Be Responsible
#Raise your voice
Send us any Fraudulent Action or Enquiry so we can ALL contribute to make a Difference
Date: 19/07/2018
Author: Minister Office
Source: MoPH 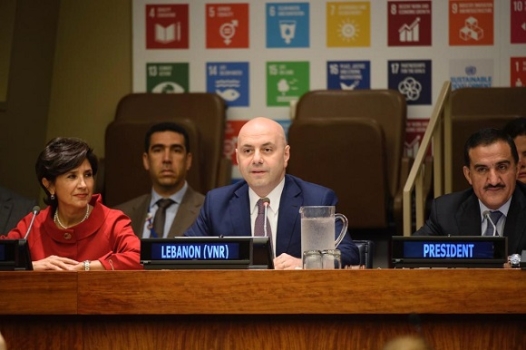 The delegation led by Hasbani included the General Directors of the ministries of Economy and Education, representatives of the presidency of the republic, the Ministry of Foreign affairs and the civil society, the action team at the presidency of the Council of the Ministers, as well as the members of the Lebanese delegation to UN in New York.  Lebanon first report was presented before the HLPF and showed the progress achieved by Lebanon as to each goal of the UN 2030 SDGs, as well as the methods and mechanisms followed by the committee to involve all the concerned entities in the public and private sectors and the civil society to finalize the report in record time.

These goals are considered as an integrated framework to develop the economic, social, environmental and health sectors, and ensure the sustainability of this development in the long term, while preserving environment and human being.

The 17 goals include end of poverty and hunger, ensure healthy lives, ensure access to affordable, reliable, sustainable and modern energy for all, promote sustained, inclusive and sustainable economic growth, take urgent action to combat climate change, halt and reverse land degradation, provide access to justice for all and revitalize the partnership at the local and international levels. These goals constitute a framework to guide investments such as CEDRE conference.

In his statement, Hasbani stressed the commitment of the government to 2030 agenda and the achievement of the SDGs.

Minister Hasbani announced also that Lebanon had achieved at least 7 goals of the SDGs, in particular in the fields of health care, primary education, and gender equality in education. “The remaining goals were found to be unachievable or not expected to be achieved in the specified time,” Hasbani added.
Hasbani finally noted that Lebanon would focus as of now on the following:
Sitemap