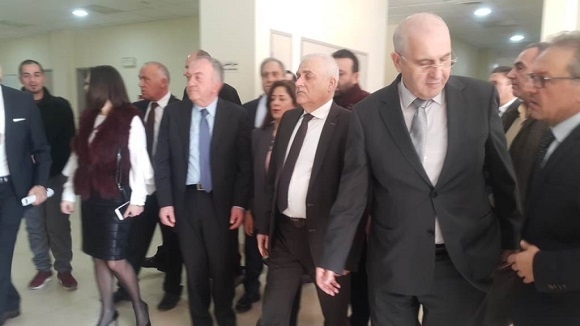 Jabak Toured Elias Hrawi Governmental Hospital: The Hospital Lacks some Equipment and we will Provide it

“We will work to provide the equipment that lacks in the hospital,” Jabak said during a meeting with the hospital’s board of Directors.

“The budget of the Ministry of Public health will be submitted according to the unlimited financial ceiling for the governmental hospitals. We will also pass laws for the reform of the hospitalization sector to preserve the Lebanese’s rights.  My work is apolitical,” added Jabak, promising that he would provide a MRI scanner and open an open heart surgery division.

Jabak then held a press conference during which he stressed on the success of the hospital at the administrative level since it has no debts. “Its work is perfect, but it still lacks some equipment and it will be prioritized”.

In response to a question on the employees’ salaries, Jabak said that these were not paid by the state, noting that the concerns will be brought up. The governmental hospitals are considered as public institutions with a private management.
Sitemap