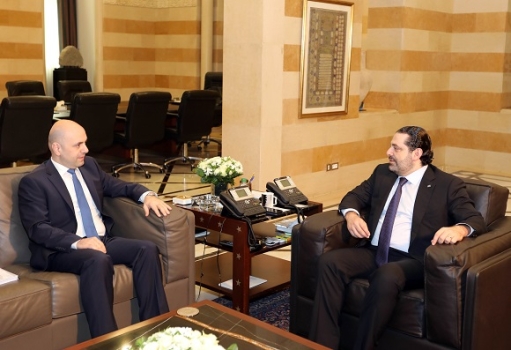 Hasbani Visited Hariri at the Serail as He Follows up Electricity File: We Have Alternatives that Can Be Incorporated in the Terms and Conditions Book

Prime Minister Rafiq Hariri received at the Grand Serail Vice Prime Minister, Health Minister Ghassan Hasbani who said after the meeting: “I informed Prime Minister Hariri of the outcomes of my visit to Washington, especially that concerning the Health sector and its $150 million, as well as the talks with the American Administration. I also discussed with Prime Minister Hariri the Electricity plan, based on my correspondence to the Presidency of the Council of Ministers two weeks ago to reiterate that the specifications should pass through the Cabinet as to the first step of the Electricity plan concerning ships. There are some alternatives I have suggested and that can be incorporated in the specifications in order to increase its transparency and the ability of this project to reduce the cost on the Lebanese State and to restore Electricity faster than expected at the moment, in the hope of placing this case before the Cabinet in its first meeting.”
Sitemap