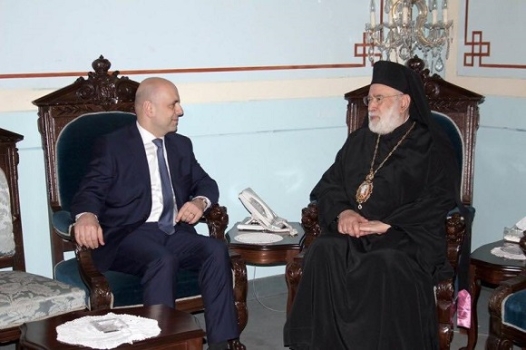 Hasbani after Meeting Audi: the License Approved to Establish Saint George University in Beirut is a Major Step and Adds Great Value to Education

The Metropolitan bishop of the Greek Orthodox Church of Antioch for the Archdiocese of Beirut in Lebanon, His Eminence, the Most Reverend Elias Audi received Deputy Prime Minister and Health Minister Ghassan Hasbani who said after the visit:

“My visit to HE Metropolitan Elias Audi is to congratulate him for the license approved to establish Saint George University in Beirut. Congratulations for Lebanon in general and Beirut in particular. HE Audi and I brought up many matters concerning the latest developments in our society and community, most important of which, the major step we took as to St. George University that will add great value to higher education in Lebanon and in the Middle East. It will also be a beacon of collaboration between the universities and the different faculties of institutions.”

“This major step will also create job opportunities in Beirut, and will help promote the level of education in Lebanon we are all proud of, which is considered one of the higher competitive components at the economic, social and scientific levels,” Hasbani added.
Sitemap