Be Responsible
#Raise your voice
Send us any Fraudulent Action or Enquiry so we can ALL contribute to make a Difference
Date: 07/08/2019
Author: Minister Office
Source: MoPH 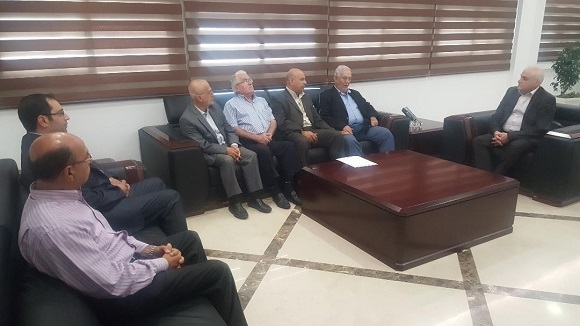 Minister of Public Health Dr. Jamil Jabak received a delegation from al-Hanan Hospital in Tripoli headed by the hospital’s director Haytham Sultan. The meeting was attended by the director of al-Zakat House Karameh Chalak, Fouad Hossein Agha and the members of the board of directors of the hospital.

Sultan mentioned that the meeting discussed the difficult medical situation of the hospitals in North-Lebanon owing to overdue payments. Minister Jabak was quoted as saying that he has transferred all the overdue payments for 2018 to the Ministry of Finance.

The director of the hospital added that the delegation hoped that Minister Jabak would reconsider the financial ceilings of the hospitals in order to provide quality services to needy patients, especially that the hospital covers five thousand orphans and mothers, which places an additional burden on it.

Minister Jabak received also a delegation from al-Wifak movement in Akkar headed by Haytham Hadara who mentioned the concerns of Akkar’s residents and the need to develop the hospitalization services in the region. He praised the response of Minister Jabak which is reflected by the considerable attention he is paying to the disadvantaged people in Akkar. He added that the Ministry of Public Health has made a significant breakthrough in the health care sector.
Sitemap