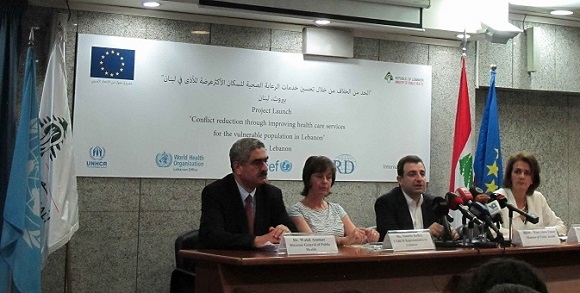 H.E. Minister of Public Health Wael Abou Faour launched a large project to support the public healthcare provision in Lebanon on July 9th,2014 at the Lebanese University Central Administration, in the presence of the Head of the Delegation of the European Union to Lebanon, Ambassador Angelina Eichhorst, the United Nations High Commissioner for Refugees (UNHCR)  Representative in Lebanon Ninette Kelley as well as the representatives of the Ministry of Public Health, the World Health Organisation (WHO), the United Nations Children's Fund (UNICEF) and the implementing partners.

Under the title ‘Conflict Reduction through Improving Health Care Services for the vulnerable population in Lebanon’, this €20 million project funded by the European Union in Lebanon, is led by the Ministry of Public Health in Lebanon, and implemented by UNHCR, in partnership with the WHO, UNICEF, International Relief and Development (IRD), International Alert (Alert).

The project aims to alleviate the impact of the Syrian crisis on Lebanon by strengthening the public healthcare system’s capacity to manage communicable diseases to provide quality primary healthcare services, as well as to ensure adequate provision of vaccines and medications throughout Lebanon.

“When a country experiences a mass refugee influx, as has Lebanon, it is critical to shore up public institutions particularly those concerned with health”, said Ninette Kelley, UNHCR Representative in Lebanon, noting that good health is key to national security, stability and resilience.  “This is well known to the Ministry of Public Health, which from the outset of the crisis has worked in concert with humanitarian agencies to respond to expanding health care needs.  In this effort, the European Union has been a visionary partner, and this project is another example of that fact.”

Ambassador Eichhorst said: "We know that the health sector needs are very high in the country - and these needs existed even before the crisis in Syria began – but the impact of the Syrian crisis on Lebanon has left its health sector in dire need for support. The European Union is responding, and through this €20 million programme that we are launching today, we will assist the Ministry of Public Health in improving healthcare services for vulnerable Lebanese communities throughout the country".

Minister Abou Faour mentioned "the failure of the international community to fulfill its responsibilities and obligations towards the displaced Syrians, leaving Lebanon to bear this huge burden that exceeds its capacities." "The tragic situation in Lebanon goes beyond the displaced Syrians to affect the Lebanese population in their pursuit of their basic needs, which confirms the importance of this European Union funded project in these difficult circumstances," he added.

Through this project, and with the technical support of WHO and UNICEF, over 180 primary healthcare centres across Lebanon will benefit from medical equipment and improved availability of chronic and essential medications and vaccines. Healthcare providers will be trained by WHO on key topics including early warning and reporting of communicable diseases, maternal and childcare, chronic disease management and mental health. 8 laboratories in governmental hospitals will be supported with medical equipment and staff to help control disease outbreaks. Furthermore, organisations working in the healthcare sector will be trained to better monitor the tensions and dynamics on the ground and adapt their programmes to support social cohesion.
Sitemap