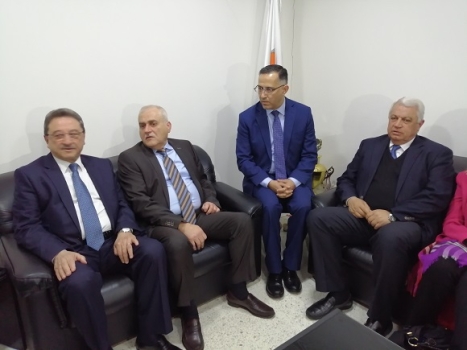 Jabak from Tripoli : I will Raise the Financial Ceiling of Tripoli and Orange Nassau Governmental Hospitals. Any Hospital that Denies a Patient Admission to the Emergency Room won't Go Unpunished

Tripoli – Minister of Public Health Jamil Jabak concluded his tour in Tripoli where he announced that he would raise the financial ceiling of Tripoli Governmental hospital to 10 billion instead of 7 billion, in view of the financial crisis that most of the Lebanese are facing.

Jabak was received by MP Samir El Jesser, the representative of MP Jean Obeid Elie Obeid, former MP Dima Jamali, the chairman of the board of directors of the hospital Dr. Fawaz Hallab and its Director Naser Adra, the representative of the Governor of North Lebanon Judge Ramzi Nohra, Luqman Al Kurdi, the head of Al-Fayhah Municipality Union, the president of Tripoli Municipality Ahmad Amar Eddine, the head of the Syndicate of Physicians in Tripoli and North Lebanon Dr. Omar Ayyach, members of the board of directors of the hospital, workers, nurses, mayors and residents.

“I praise the board of directors of Tripoli Hospital and I would like to thank them for their efforts. I will raise the financial ceiling of the hospital because I think that Northern people deserve it,” Jabak announced during a news conference after he toured the facilities of the hospital.

When asked on the hospitals that cannot admit patients in some cases for they lack the required treatment equipment, Jabak said that they have the solution for this problem by dialing the Ministry’s hotline 1214. The patient is transferred to the suitable hospital; otherwise, he shall be kept at the hospital emergency and receive the necessary treatment.

Jabak praised the achievements of the hospital, noting that the institutions cannot be built without a good director and a board of directors.
Sitemap