Be Responsible
#Raise your voice
Send us any Fraudulent Action or Enquiry so we can ALL contribute to make a Difference
Date: 26/07/2019
Author: Minister Office
Source: MoPH 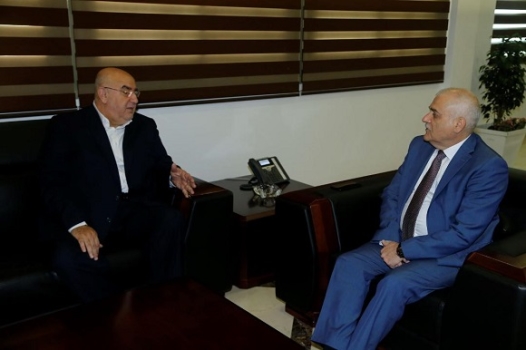 Brigadier Hamdan Meets Minister Jabak: A Breakthrough in Health Security will be Achieved

Minister of Public health Dr. Jamil Jabak received the head of the Independent Nasserite Movement Brigadier Mostafa Hamdan who noted in a statement after the meeting that Minister Jabak bears responsibility for the health care situation, which is considered as a burden and an extremely important matter since it is closely related to the security of the Lebanese citizens in terms of hospitalization and medicines.

Hamdan expressed his appreciation to the efforts exerted by the Ministry of Public Health in the pharmaceutical sector, in the light of the new procedures introduced by Minister Jabak in relation to the drug prices. Hamdan mentioned as well how the ministry is working to provide health services to all the Lebanese citizens across Lebanon by opening news hospitals and health care centers.

Hamdan stated that a breakthrough in Health security will be achieved through the steps taken.

The media office of Minister Jabak reminds the citizens that they can call the Ministry’s hotline on 1214 when they encounter any problem and calls on them not to have recourse to social media to report any problems they might encounter.
Sitemap