Be Responsible
#Raise your voice
Send us any Fraudulent Action or Enquiry so we can ALL contribute to make a Difference
Date: 04/05/2018
Author: Minister Office
Source: MoPH 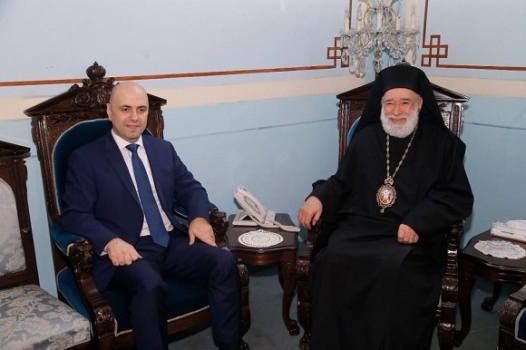 The Metropolitan bishop of the Greek Orthodox Church of Antioch for the Archdiocese of Beirut in Lebanon, His Eminence, the Most Reverend Elias Audi received Deputy Prime Minister and Health Minister Ghassan Hasbani who said after the visit: “I am happy to meet today HE Metropolitan Elias Audi. We have discussed a subject of extreme importance, i.e. the file of Saint George University in Beirut.”

“This file was brought up long time ago, and was postponed despite the fact that we have insisted on approving it as a clear and complete technical file that is considered one of the most important university files that were placed on the table of the cabinet. The work on the file was postponed to allow for many discussions and was brought up again yesterday on the table of the cabinet outside its agenda. We have reiterated our position yesterday as to the completion of the file, but the cabinet is involved in discussing its content and the technical part of the same, and should assume its responsibility and endorse it.

However, it was agreed between some ministers that are trying to oppose the file to delay it to the next session that will be held after the elections,” Hasbani said.

“I hope that this subject wouldn’t veer off-course and that the cabinet wouldn’t disregard such a file to support it and enter it into effect.”
Sitemap