Be Responsible
#Raise your voice
Send us any Fraudulent Action or Enquiry so we can ALL contribute to make a Difference
Date: 29/06/2018
Author: NNA
Source: MoPH 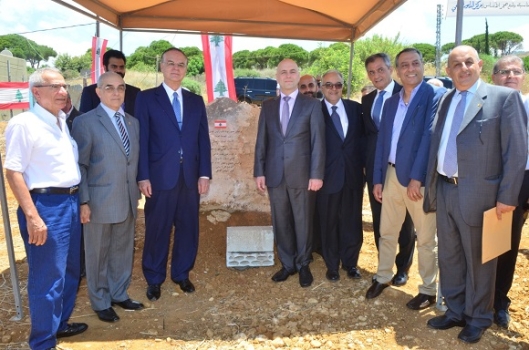 NNA- Caretaker Deputy Prime Minister and Health Minister Ghassan Hasbani, the member of the “Strong Republic” coalition MP Georges Adwan and the president of Damour Municipality Charles Ghafri laid this afternoon the foundation stone for Damour Medical Center DMC where it will be established on the eastern part of the village, next to Damour Official High School.

In reference to DMC, Charles Ghafri stressed that he would work in a next phase on the completion of the hospitalization section after securing the necessary funding. Ghafri thanked Hasbani for “his presence and patronage” and praised the efforts of MP Georges Adwan to ensure the success of this project through the donor institutions and the Council for Development and Reconstruction …

Adawan stressed the importance of the medical center in Damour to ensure health requirements and work on developing the center. He noted that this was achieved thanks to the tremendous efforts and collaboration with Minister Hasbani. “The Medical Center is a hospital rather than a dispensary. Securing an amount of one million and a half from an Arabic fund was not allocated to the dispensary. We aspire to establish a hospital, a center for mechanical inspection, a civil status affairs center and a criminal record center in Damour, and this could be achieved through the extended administrative decentralization,” Adwan added.

“We introduced technology to these centers, and once the center is established, it will constitute a part of the technological platform where all the medical files will be electronic. Telemedicine has been also introduced in a way to enable doctors to provide health care to patients in primary health care centers through a small screen connected to a technology designed to perform more than 16 tests, including EKG, knowing that the doctor can be working in a university hospital or anywhere around the world,” Hasbani stated.

Hasbani noted that this is happening for the first time in the Middle East as he praised the tremendous efforts of MP Georges Adwan since the idea of the center establishment has been introduced. He stressed that this center would be the most important center in Primary Health care network in Lebanon that includes 200 centers across Lebanon and hope that this number will increase to 250 centers. Hasbani announced the support of the Ministry to the center that serves the residents of the Southern coast of Lebanon and Beirut.
Sitemap